In 2004, Steve was diagnosed with Non-Hodgkin’s Lymphoma, and is currently in remission. As an artist, he continued to paint throughout his illness and treatment - therefore the cancer spread into his work. The cancer had become part of himself and had to be depicted.

His studio practice led him to create a body of work that contains images of a journey through an illness. This is reflected in a series of invited essays, which attempt to articulate the broad and varied meanings of cancer in the personal and social sense, within the language of fine art. The essayists all have direct links to Steve, his work, illness and vision, and cover a wide interdisciplinary field of perspectives.

A selection of artwork from the 'you look well' exhibitions can be viewed in the Portfolio gallery.

'you look well'
Includes essays by...

hindsight, oil on canvas x 3, 76cm x 61cm, 2004
Excerpt from essay
by Suzanne Moore
Award-winning Writer /Columnist from Elle to
The London Review of Books, Columnist for
The Guardian and The Mail on Sunday

HOW DOES ONE INCORPORATE CANCER?
Russell is striking in his detachment, self-observation
and also his idiosyncratic choice of imagery wasnow
2006 (cat. 39), his lack of interest in other people’s
‘metaphors’ is powerful. He seeks to draw, paint
and map his own way through his illness, whether it
be jumping over ‘the mortality box’, hindsight 2004
(cat. 10) or painting himself, you look well 2005
(cat. 18) unblinkingly bloated with steroids. But how
invisible is the cancer experience? In popular literary
terms it is everywhere. The writer, Dina Rabinovitch,
who has breast cancer, was told by a publisher recently
“the cancer memoir is a crowded market”. We are
now flooded with the cheery cancer memoir. As the
journalist, Jan Moir has commented, Ruth Picardie’s
‘Before I say Goodbye’ and John Diamond’s ‘C. Because
Cowards Get Cancer Too’, became the “the mummy
and daddy of the modern genre”. Oncologists note that
many patients want their information presented less
“funnily”. Such books are "as notable for what they
don't say as well as what they do".

STEVE RUSSELL AND THE CHALLENGE OF THE MORBID GAZE
Natural death is the obscene mystery, the ultimate affront,
the thing that cannot be controlled. It can only be denied.
Susan Sontag

Of course, there may be an empathetic bond between
the viewer, who needs to understand an illness in human
terms, and the viewed, who experiences the illness.
But the inevitable thing about living within what Guy Debord
has defined as the “Society of the Spectacle” is that there
is rarely space outside this experience of being looked at
(and looking). The opportunities for looking that a serious
medical condition provides are rarely satisfied by the idea
of an inspecting medical gaze, because illness provokes
many types of curiosity. Perhaps the common response -
‘you look well’ to Steve Russell’s disclosure of Non-Hodgkin’s
Lymphoma (now in remission) was prompted, not just by
denial and embarrassment about his life-threatening illness,
but also by disavowal of the hidden morbid desire to gaze
upon the possibility of death’s image. Steve says it was
better than being ignored or interacting with people who
simply couldn’t look him in the eye. 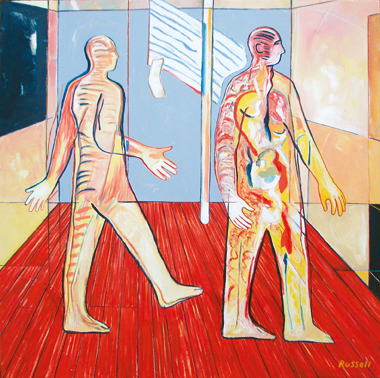 
Excerpt from essay
by Liz Hoggard
Columnist - Evening Standard
Author - How to Be Happy: Lessons Learned from Making Slough Happy

NIGHT OF THE LIVING DEAD
I’ve known Steve Russell’s paintings for 20 years now.
Full of wit, colour and humanity, they are easy to love.
But I admit the new body of work is a shock. A shock
because Steve documents his illness unflinchingly.
He is an artist first and a patient second. Everything
around him, scents, sounds, the sandwich eaten during
chemo, becomes legitimate material. The quality of his
attention is forensic, whether he’s recording the way
the syringe hits the vein, or the George Clooney ER
screensaver on the nurses’ computer.
Next
Previous